BACKED UP BY DATA 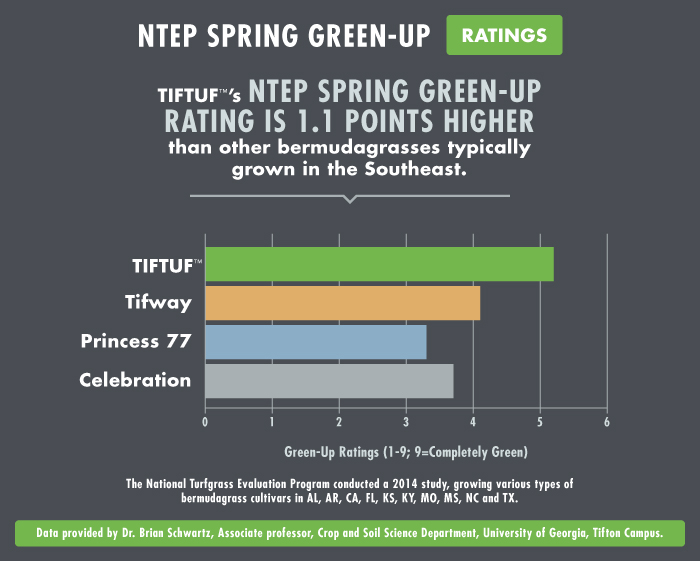 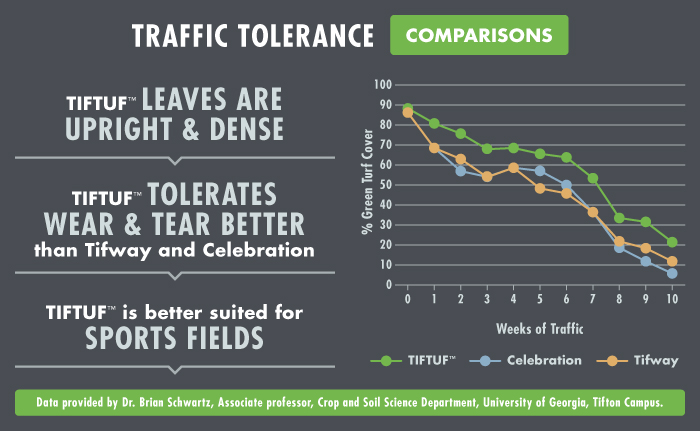 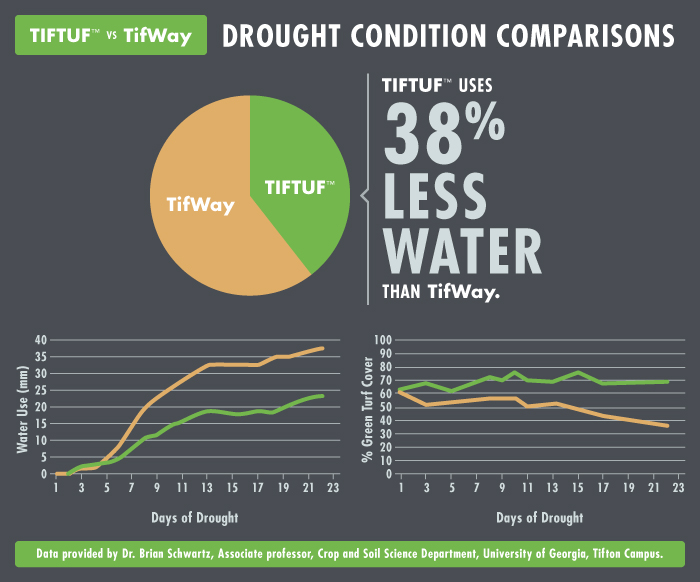 Nearly twenty-five years of testing and development have resulted in the release of TIFTUF™, the new standard in drought-tolerant bermudagrass. Selected for superior drought and wear tolerance, TIFTUF has been rigorously developed and tested since 1992 by a team of researchers led by Dr. Wayne Hanna and Dr. Brian Schwartz at the University of Georgia.

TIFTUF was bred as one of 27,700 experimental bermudagrass genotypes. In 1999, ninety of the most promising genotypes were planted under a rainout shelter and evaluated through 2001 under deficit irrigation. Under this drought stress, TIFTUF (tested as experimental name DT-1) maintained its quality and green color the longest.

The mechanism of TIFTUF’s drought tolerance may be reduced water use, particularly in heavier soils. During testing, soil moisture remained consistently higher in TIFTUF plots than in plots containing other bermudagrass varieties. In 2011, continuing drought study testing established that TIFTUF used 38% less water and retained 95% more green leaf tissue during drought stress when compared to Tifway.

In 2013, TIFTUF was entered into the National Turfgrass Evaluation Program (NTEP) bermudagrass trials where it is being evaluated in 20 locations across the United States until 2017. NTEP results from 2014 reveal that TIFTUF scored the highest quality ratings in the following test locations: North Carolina, Florida, Mississippi, Tennessee, Texas, Oklahoma and California. TIFTUF also ranked in the highest statistical group for quality in Alabama, Georgia, Indiana, Kansas, Kentucky and Missouri.

Further testing has also revealed that TIFTUF appears to have excellent cold tolerance in comparison to other bermudagrass varieties. In NTEP trials conducted at Haysville, Kansas in 2013 and 2014, TIFTUF recorded over 90% survivability at -6 degrees F outperforming Tifway and Celebration common Bermuda. Kansas State University has also reported that TIFTUF achieved 94% survival which is equal to Latitude 36, Yukon, Patriot and Riviera.

With ongoing evaluations being conducted through numerous University research collaborators, along with various golf course and athletic field organizations, it is expected that TIFTUF performance breakthroughs should continue to surface. Combined with nearly 1,500 acres of TIFTUF currently in production at over 30 locations nation-wide, this phenomenon has just started to take hold. So if you’re seeking a truly superior turfgrass for performance, aesthetics and sustainability, you’ve just found it.

TifTuf™ is a trademark owned by The Turfgrass Group.

TifTuf™ performed very well on our large-scale Linear Gradient Irrigation System at the University of Florida. It maintained good quality with significantly less water compared to the other commercially produced cultivars.

We found evidence that TifTuf™ used less water than Tifway 419 and TifSport. It’s just a very tough and drought-tolerant grass. As soon as it quits raining, TifTuf™ is still performing well, unlike others that can start to fail.

While researching TifTuf™, I was impressed by the cultivar’s tolerance to adverse conditions, particularly drought, low fertility, traffic and cool weather. In the trial work I conducted, TifTuf™ was the first cultivar to green up in the spring, the last to go dormant during drought conditions and the most tolerant to traffic. Other notable characteristics of TifTuf™ include fine leaf texture and high turf density, as well as aggressive growth and establishment rates.

With its combination of drought tolerance, aggressive growth and superior fall color, it has a great place in the industry.

It also survives winters in Kansas. With 94% survival, it is no different than Latitude 36™, Yukon, Patriot™ and Riviera.